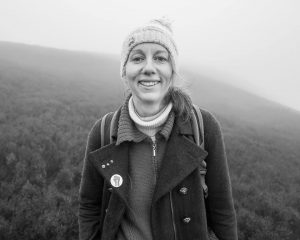 2) What distinguishes you from other activist organisations addressing similar issues?

I don’t know other organisations well enough to feel that this organisation is utterly distinctive and it could be arrogant to suggest it is. What we came together to do is

We have done a lot in a short space of time and had quite a few successes, helped by our distributed organising model based in holocracy. 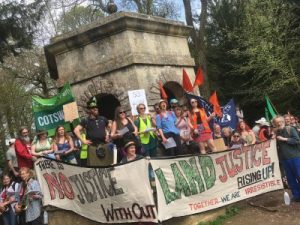 3) How do you define nonviolent action? What are the limits and the possibilities?

Nonviolence keeps our movement alive. We use nonviolence to reveal the true perpetrators of systemic violence that people suffer from daily all over this world.

It is our strategy to bring light to the injustice that too many suffer each day. We feel pain from the abuses of the police and others, and we will keep exposing their violence through our discipline.

Nonviolence has unequivocally been demonstrated to be an effective tool in mass mobilisations and so we base a cornerstone of our movement on this.

At the same time, we also recognise that many people and movements in the world face death, displacement and abuse in defending what is theirs. We will not condemn those who justly defend their families and communities through the use of force, especially as we must also recognise that it is often our privilege which keeps us safe.

We stand in solidarity with those who have no such privilege to protect them and therefore must protect themselves through violent means; this does not mean we condone all violence, just that we understand in some cases it may be justified.

Also we do not condemn other social and environmental movements that choose to damage property in order to protect themselves and nature, for example disabling a fracking rig or putting a detention centre out of action. Our network, however, will not undertake significant property damage because of risks to other participants by association. 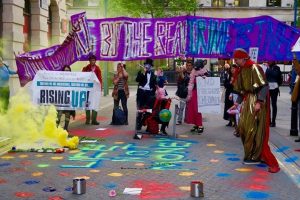 RisingUp’s Life Not Money campaign at the London School of Economics. Source: RisingUp

4) How is RisingUp resourced – do you crowdfund, receive any other funding, or run on volunteer time and donated resources alone?

We have received money from Lush, the Guerilla Foundation and some organisations and people that fund activists and prefer some confidentiality, and also through crowdfunding.

We are run on volunteer time but we are also trying to find a different path from the tension of volunteer vs salaried person – neither of which we believe is effective or sustainable in the long run and to the extent that change is needed.

So we are trying to implement something we call a compensatory budget.

5) Who can become involved in the activism you’re promoting? Where would they start?

Anyone if they agree to adhere to our principles and values as outlined in this document – permission isn’t needed to do things in the name of RisingUp on that basis.

Our current project is the Extinction Rebellion – it’s the biggest thing we have attempted.

People are hosting talks in the areas where they live and we’re asking them if they are willing to take part in processes that will lead to arrest and very short periods of time in jail.

And if they are unable to do that, they can support those that can by offering help with well-being, media communications, etc.

6) Are you having any success in reaching groups of people who don’t usually define themselves as activists?

Yes! People are hearing the call.

Our experience is that, when the truth is told about climate change, it’s very hard for people to hear the latest data and the scientists who are breaking rank to speak out – people face a fear and a grief that for some brings out a new level of desire to act and offer service for the land and children, for the earth, for justice.

An example of our talks is available here.

7) What are your priorities for the coming months?

We are facing an unprecedented global emergency. Our children and our nation face grave risk.

The planet is in ecological crisis, we are in the midst of the sixth mass extinction event this planet has experienced. Scientists believe we may have entered a period of abrupt climate breakdown.

The earth’s atmosphere is already over 1°C warmer than pre-industrial levels. The chances of staying below the 2°C warming agreed on in the Paris Agreement are tiny.

Recent projections show we are on course for 3°C of warming and potentially much more.

Children alive today in the UK will face unimaginable horrors as a result of floods, wildfires, extreme weather, crop failures and the inevitable breakdown of society when the pressures are so great.

We are unprepared for the danger our future holds.

It’s time to act like that truth is real.

What does living with this truth call us to do? Will you die knowing you did all you were able to?

We are calling people to rebel – to join our Declaration of Rebellion at Parliament on 31st October and then from 12th November to join us in committing ongoing acts of civil disobedience. 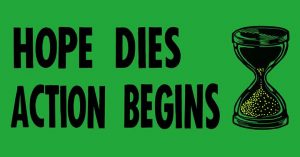 8) Commmonweal runs a nonviolence library and when we have funding we also give away copies of books that are useful to nonviolence activists.

Can you recommend any titles that you have found especially useful?

Our Key Texts and Resources are here on page 19 (see the Google document for a summary of what each one covers).

9) What keeps you resilient?

We suggest that those of us involved consider our own well-being and personal development  – to see ‘inner work’ and self-care as part of the work of activism.

For myself, I exercise, meditate and go to ceremony / sit in circle with Sisters. I am a pagan and draw inspiration from nature and something sacred and beyond myself.

Erica Chenoweth’s data on revolution and social change keeps me motivated (see above / page 19 here). 1% to 3.5% of the population is all that is needed to make change – about 1–2 million in the UK.

Our team is working so hard at the moment, I think we keep each other going!

BRADFORD EVENT 11th October 2018: Climate Change: Heading for extinction and what to do about it