Readers of this blog post may know something about Michael Randle already – not least because he is a Commonweal trustee. I got to know Michael four years ago, when I worked as an assistant in the Special Collections department at the University of Bradford. One of the delights of that job was caring for Michael’s archive, one of the jewels of the university’s collection.

The present book Ban the Bomb! Michael Randle and Direct Action against Nuclear War is a collection of my interviews with Michael and his wife Anne, the partner in many of his adventures.

And what a life it has been. The interviews carry Michael’s story from his boyhood in the south London suburbs, through his work at Peace News and for the Direct Action Committee (DAC) and the Committee of 100, forwards to his time as an academic in the Peace Studies department of the University of Bradford and then, finally, on to his active retirement in the West Yorkshire town of Shipley. 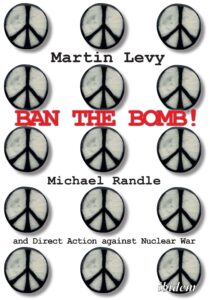 All in all, these have been busy and, for the most part, action-packed, years, and Michael does not hold back in his account of their excitements and complexities.

I suppose for most readers, however, it will be Micheal and Anne’s involvement in the escape from prison of the Russian spy George Blake in 1966 that will be the stand-out issue in the interviews. But for me it is Michael’s long commitment to the anti-nuclear movement.

Typically, Michael speaks of his contribution to fighting the Bomb with modesty and understatement,but, during the 1950s and early 60s, he was one of the movement’s major figures, a friend and colleague of other noted rebels like Terry Chandler, Pat Pottle, Ian Dixon, April Carter and Pat Arrowsmith.

No wonder he got up the nose of the establishment!

The book contains a foreword by Michael’s former Bradford University colleague Paul Rogers and is published by Ibidem.