In the news, we are hearing increasingly worrying statements from the leaders of the USA and North Korea about their nuclear intentions.

And today – August 9th – is the anniversary of the dropping of the atomic bomb on the Japanese city of Nagasaki in 1945, killing tens of thousands of people:

I had never experienced such an intense bluish light, maybe three or four times brighter than the sun shining above us.

All in all, today seems like a good day to show you this pamphlet from the Commonweal Archives…

The will to peace remains to be created … But history shows that the determination to substitute the rational method of law for the violent arbitrament of battle has existed and found expression throughout the centuries, and this provides us with a reasonable hope for the resurrection of sanity. 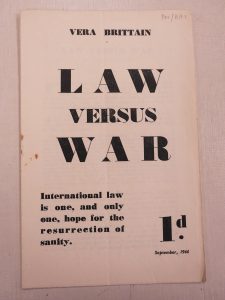 The necessary ‘will to peace’ was not achieved in time to avert the nuclear horrors inflicted on Hiroshima and Nagasaki in 1945, nor many other horrors of war since. But what is the potential for it now?

Professor Paul Rogers, one of Commonweal’s trustees, recently summarised the background to current tensions between North Korea and other powers, and he identified what needs to be done next to foster peace:

This is a time for diplomacy that ensures tension with the “fortress state” is turned from military threat to a peaceful outcome.

So what can we do?

Those of us whose lives seem far removed from world leadership still have our part to play in building a foundation for peace and letting our representatives know what we need from them, and also what we will not accept from them.

In the UK, take action with CND, which campaigns ‘to scrap nuclear weapons and create genuine security for future generations’. Also check out the International Campaign for the Abolition of Nuclear Weapons.

Borrow these practical tips on political engagement in the UK from Quakers in Britain.

Research the role of the citizen in preventing nuclear war.

What else can we do? Please add your suggestions in the comments. 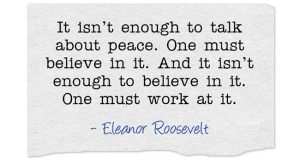