On a basic level, I guess, climate shapes culture: the ways societies live within their environments, accommodating regional patterns and seasons.

Much of that accommodation is to do with how humans try to understand, predict and protect themselves from climate norms and extremes wherever they live.

Those norms and extremes vary hugely around the world (and over time), so I imagine that differences in culture are also partly affected by this variation – though not in a simple, deterministic way.

Imperial geographers used to find some very handy climatic justifications for the supposed ‘superiority’ of their European cultures over the ones they encountered around the globe. This made the imperial project seem very natural.

This convenient ideology helped drive a lot of the environmental destruction and social oppression that still exists today, and which, of course, climate justice activism and other types of activism are trying to redress.

It’s awareness of these links, of the almost supernatural status we grant to what are actually quite recent assumptions about progress and growth – and to the mantra that ‘there is no alternative’ – that drives a lot of activism and attempts to decolonise our culture.

This activism asserts that, yes actually, there are alternatives, and we need them. 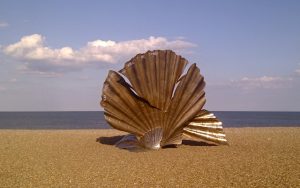 Scallop, by Maggi Hambling, on Aldeburgh beach. ‘I hear those voices that will not be drowned.’ Image ©Mark Goldthorpe 2014

2) What led you to undertake this project? Have you been involved in any forerunners?

Most of my earlier environmental career involved working with businesses, public bodies and NGOs in local, regional and national programmes to improve their use of energy and resources and reduce waste and pollution. More recently, it also focused on how they take into account what impacts climate change will have on society in two or three decades.

But the longer I focused on that, the more I felt something fundamental was missing in how we talk about climate change and we wouldn’t achieve much change without it: imagination.

Very few people really feel how extensive and rapid environmental destruction has been, what the acceleration looks like and how what lies ahead is far more perilous. 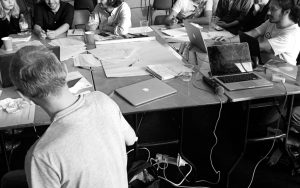 It’s called shifting baseline syndrome: essentially, we all get used to the conditions we inherit. The new, degraded environment becomes ‘normal’, and we fail to see that what looks natural, stable and manageable is in fact unbalanced, accelerating, in crisis.

Our imaginations have become insulated and we need greater creativity to help us see what’s happening, what the alternatives are, and to work on them.

I don’t mean it’s the job of art or artists to ‘explain’ the climate crisis. It’s not about using art to translate science so people ‘get it’, about creating better policies and laws or nudging behaviour change.

It’s simply about finding ways to pay attention to what’s going on, to the voices we don’t normally hear (human and non-human), to whatever creativity others are bringing to it, and the creativity we can bring ourselves.

It’s about possibility – having conversations and then finding better ways to do things, and better things to do, because of those conversations.

I was fortunate to be asked to help TippingPoint1 organise their last four events. That charity did great work bringing together artists of all kinds, at all stages of their development, with climate change experts from sciences, social sciences and humanities. It created space for conversation, inspiration and collaboration.

There are other organisations too, such as art.earth,2 whose work inspired me to set up ClimateCultures.

Partly, I wanted to take what those gatherings offer artists for a few days a year and complement it by opening up a space between those events. Scientists have their climate networks and forums – artists and curators less so. And I want it to be a space for original work by artists and others, not just circulating what already exists: to grow the content and the conversation.

3) What have been the most memorable artistic moments for you in the course of this work?

Every artist’s post I publish on ClimateCultures feels memorable to me!

A personal highlight is a series I launched called A History of the Anthropocene in 50 Objects.

Each contributor writes about three objects that speak to them about some aspect of the past, the present and a possible future, as we begin to realise how our species (led by the rich, industrialised nations and the well-off) has shifted the planetary systems all species depend on.

Each artist has brought something new to that conversation – not just their objects, but the meanings and emotional significance they hold.

4) Our focus at Commonweal is on nonviolence. How would you define violence and nonviolence in the context of climate disruption and climate activism?

I think the most fundamental shift in perception we can make – one we need right now – is that climate disruption is violence.

The Anthropocene is violence. It’s violence we do to ourselves, to people all over the planet, to the other species we live alongside or far removed from, and to the future.

And, of course, that violence and its causes and impacts are very unevenly distributed. Normal, everyday acts (travelling, shopping, surfing the web, this interview) only happen through the vast, complex infrastructures exploiting minerals, metals, fossil fuels, petrochemicals, habitats, animals and other humans.

These systems circulate the ‘goods’ in some directions and the ‘bads’ in others – including the violence of pollution, destruction and poverty. These circulations underpin the standard of living for the lucky few (me included).

Hence the activism and the need for activism. 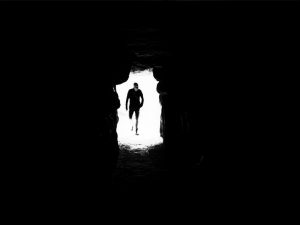 But I’d add that there are no blueprints. If we think we have a neat solution to the climate crisis (and everyone has a different solution), then we clearly haven’t understood the situation.

Climate change isn’t simply a ‘problem’ waiting for a solution. It’s a predicament we have to find ways of addressing, of caring about. Ways: plural, unfinished, messy. Coming back to art, imagination and creativity again…

Unfortunately, in this context, nonviolence is harder for me to define and I’d be interested in what your readers have to say. I’m not talking here about the very direct (though often hidden) violence done by corporations, governments, individuals to advance their interests; or of the direct nonviolence of communities, NGOs and individuals seeking to expose and oppose those.

What I’m asking is: if even our most innocent and altruistic actions imply some level of violence arising through the systems we rely on, then we certainly need more and better ways to reduce those flows of harm, oppose the causes, mitigate the suffering and care for our place in the system, but what is nonviolence at its core?

In that context, nonviolence seems a very tough thing to define – and I don’t have a good answer. Let me have yours!

5) You’re also involved with Finding Blake, a project that focuses on William Blake’s legacy and its relevance today. Please tell us more!

I love that project! It’s the brainchild of James Murray-White, a filmmaker I met through TippingPoint1 and an active supporter of ClimateCultures.

I’ve always been gripped by William Blake’s art and the way he influences our culture – although he was largely unrecognised at the time he died.

But I’ve never really understood exactly where he was coming from. He had some very interesting views, let’s say, but inevitably they’re not as easy (for me) to grasp as his art.

So when James said he was crowdfunding this project, I wanted to get involved – mainly through setting up the website and editing the blog contributions. Very crafty really, because this exposes me to lots of Blakean content that’s new to me, helping me get a fuller picture of this visionary, poet, artist!

There’s an important link for me to ClimateCultures, because Blake fought against what he called ‘singular vision’ and in favour of an expanded way of perceiving the world. For him, imagination was key.

Science has made wonderful advances in how we understand the world, giving us great tools to improve how we live within it. I’m no anti-science discontent – I spent four years studying to (not) become an astronomer, and many more re-employing that fascination with science in environmental work.

But the simplistic, singular vision of reductionism is a big part of the predicament we’ve backed ourselves into.

We need a radically expanded vision to help us find better ways forward.

And Finding Blake – although not about climate change, environment or any other single topic – aims to help us imagine ourselves through more Blakean eyes, and reimagine what this 18th– and 19th-century radical offers a 21st-century culture. 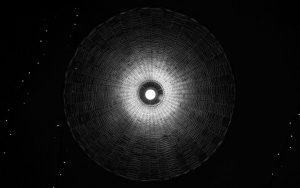 ‘Light into the dark’ ©Mark Goldthorpe

Mark is an independent researcher, facilitator and writer on environmental and climate change issues. He focuses on investigating, supporting and delivering cultural and creative responses, and in 2017 created ClimateCultures as a free online platform for artists, curators and researchers to develop and share their work on these topics. Find out more at markgoldthorpe.net – and you can see his work at climatecultures.net and findingblake.org.uk.

1 TippingPoint, created in 2005, was a charity connecting the worlds of the arts and climate science. Its twelve-year programme of major events led to conversations, collaborations and new commissions in writing, performance and other arts. In 2017, TippingPoint became part of the wider programme of Julie’s Bicycle, where TippingPoint’s founder remains on the advisory group.

2 art.earth is a family of artists and organisations focusing on contemporary art and ecology, the environment and the natural world. art.earth produces events, conducts research and works with others to make new projects happen. ‘We’re here because we believe strongly that art has a role to play, and that artists have a responsibility to pose questions and to worry about the way we live in and on our world.’